Determining The Sex in Discus Fish 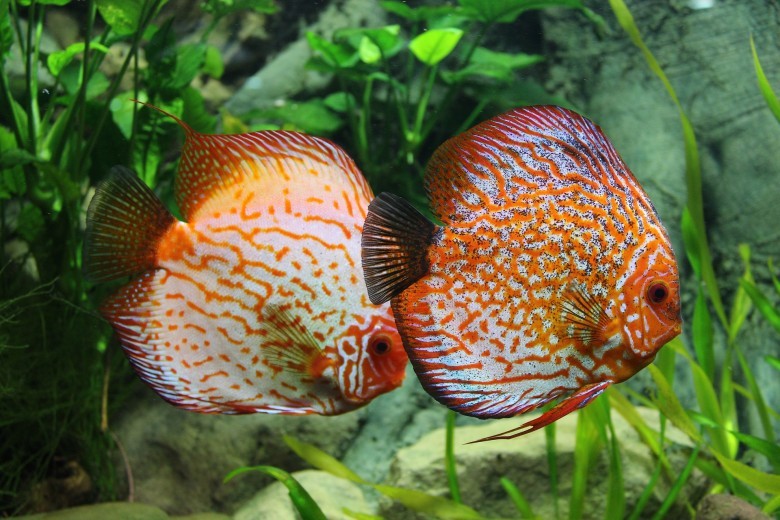 In juvenile fish, determining sex is almost impossible. It is only when they begin to pair off that an opportunity arises to help in the determination of sex. Juvenile fish, both male and female, have a rounded dorsal fin, and it is not until they begin to mature that a difference can be detected. As it is never wise to excessively handle the fish, close observation is in order to aid the breeder.

In Allnut Enterprises' King Discus Hatchery, for example, it is an easy process to determine who is who, as we have observed these fish for a while, and can determine the sex of the pairs we own. This would be true in any hatchery. But to the uninitiated or casual observer, this would not be easy to do.

Some of the identifiers: The male will have thicker lips to aid him in his fight to protect the female, and will be more aggressive. He will be larger than the female, his forehead is thicker, and we have observed that if the discus are a bit shy, the male will have a tendency to stay between the female and the observer.

The dorsal fin of the male will be pointed, and the female's dorsal fin will be rounded. Note that in juvenile discus, this is not apparent.

It has been said that the male discus fish will tend to have a less intense color and more pattern while the female tends to be more colorful but with lesser pattern. I disagree, because too many variables are in place here, such as the health of the discus, the water parameters, and feeding pattern.

In an interesting article by

Sexing Discus is difficult at best. The easiest way to do so is to raise a group of at least six to eight discus, and allow them to pair off when ready. It is a beautiful sight to see this happen, and makes the hobby well worthwhile.

Alden Smith is an award winning author. His website at

is filled with information and articles relating to the hobby. This article is one of a series on Discus fish. Find more at his site.