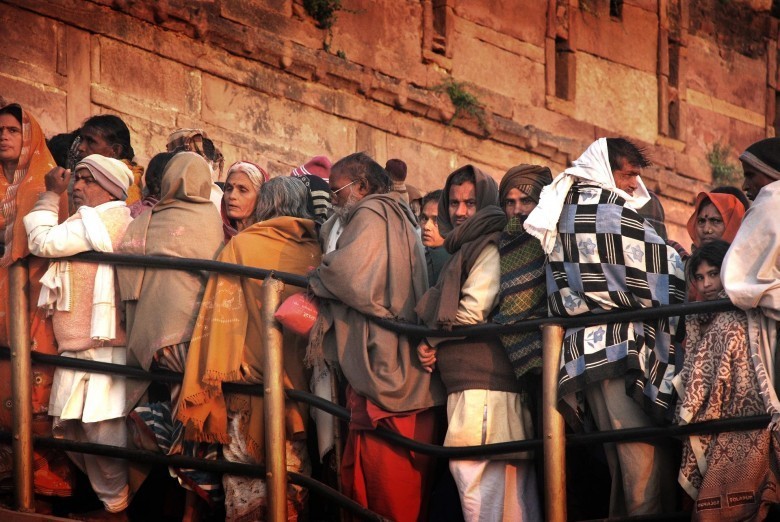 Each year millions of people take to the waters at the junction of India's sacred Ganges and Yamuna rivers to take  part in the Kumbh Mela festival which has grown to become humanity's largest gathering.

This year 2019,  the organisers estimate that around 120m visitors with attend over the festivals 49 days duration.

Hindus believe bathing at the rivers will cleanse their sins and bring salvation.

The holy men were among the first procession to arrive early Tuesday.

Sadhus - or ascetics - smeared ash on their bodies as they came out of the water and chanted "Har Har Gange", or "Mother Ganges", and danced while posing for photographers.

The Naga sadhus are the biggest draw of the festival - held in the northern city of Allahabad, recently renamed Prayagraj - and can be counted on to arrive in massive colourful processions.

At the last Kumbh in 2013, female ascetics were allowed to bathe at the confluence of the rivers - known as the Sangam - for the first time. A few hundred transgender people were among those who bathed on Tuesday morning.

He and other organisers had been preparing for more than a year for the event, which dwarfs the annual Hajj pilgrimage to Islam's holiest sites in Saudi Arabia.

"All the religious sects have been allocated time for their processions and bathing rituals," Mr Rai said. "We have devised a traffic plan to ensure there's no overcrowding. The mela area is open only to pedestrians."

The mela (meaning "fair" in Hindi) has been held in Allahabad for centuries now, but it has grown into a mega event in the past two decades.

This year the gathering will be particularly huge and many believe India's Hindu nationalist government has organised it with an eye on key general elections due in the summer.

A temporary tent city, spread over 32 sq km (12 sq miles) has been set up to accommodate the masses, complete with hundreds of kilometres of new roads. Hospitals, banks and fire services have been set up just for the festival, along with 120,000 toilets.

Hundreds of new train services are running to and from Allahabad to tackle the rush of pilgrims and more than 30,000 police and paramilitaries have been deployed to provide security and manage the crowds.

In the run up to the festival, religious sects held daily processions marked by much pomp and show.

At one such procession on Sunday night, there were elephants, camels and horses. Brass bands and drummers played, as religious leaders sitting atop several vehicles threw marigold flowers to thousands of devotees.

On Monday - a day before the official start of the festival - tens of thousands of pilgrims bathed at the Sangam. Some then lit clay lamps and floated them along with flowers in the Ganges.

The atmosphere at the mela is festive, and the authorities have announced a calendar of music and dance performances. But there's plenty of impromptu entertainment taking place by the roadside, with children performing rope tricks and shows by drummers and ballad singers.

Most pilgrims, however, say they are here to "answer the call of Mother Ganges".

"We believe that bathing here will destroy our sins," farmer Pramod Sharma said.

"The waters here have regenerative properties. Bathing here can cure your ailments. It also removes obstacles from your way," Shahbji Raja said.

Kumbh Mela at a glance