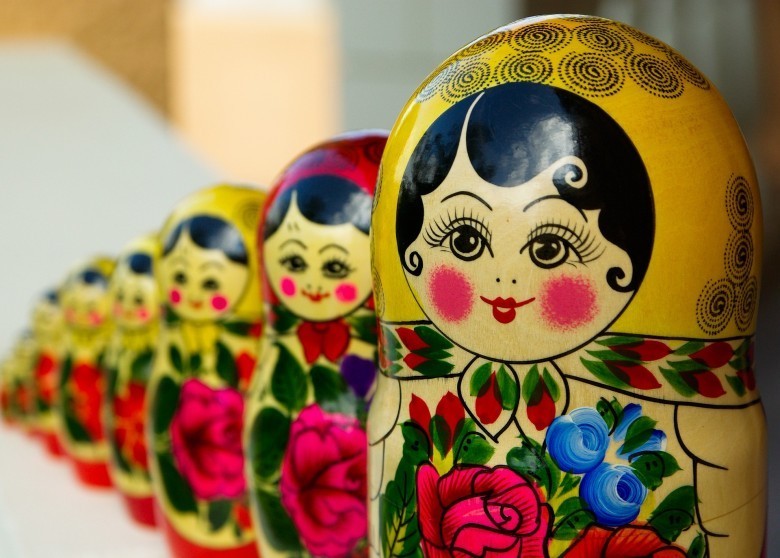 Matryoshka Russian dolls are a set of painted wooden dolls that are hollow on the inside and can be unscrewed at the center. The dolls are of different sizes, and the smaller ones can be placed in the larger ones. Due to their cuteness and uniqueness, they are becoming increasingly popular these days, and you can find them in numerous stores around the world. They are wonderful works of art that can brighten up any home, and they also make excellent gifts for all kinds of occasions.

Usually, a matryoshka set consist of dolls that follow the same theme, which can be anything ranging from “farm” to “politicians”. When the largest doll is unscrewed, with top and bottom separated, it will reveal a doll that is slightly smaller. The second doll will also contain a smaller doll, which can be opened up to reveal another doll. After opening several dolls, the smallest doll will appear, and this doll is not hollow and cannot be unscrewed. Traditionally, the number of dolls in a matryoshka set is between five and nine, but now, there are some sets that have up to several dozen figures.

Matryoshka dolls have a rounded top, and they are roughly cylindrical in shape, with no protruding features. In a traditional matryoshka set, the largest figure is usually a woman wearing a sarafan, and the smaller figures can be either male or female. The innermost doll is typically an infant, which is painted on a small piece of wood. The word “matryoshka” means “little matron” in Russian, which is the reason why the outermost doll is often a woman. The images that are painted on the dolls can be very elaborate, and the artist needs to have outstanding painting skills and meticulous attention to detail to create them.

The first set of matryoshka dolls was carved by Vasily Zvyozdochkin and painted by folk crafts painter Sergey Malyutin in the year 1890. It comprised of eight dolls altogether. The outermost figure was a girl wearing a traditional dress and holding a rooster, the smaller figures were several girls and a boy, and the last figure was an infant. Zvyozdochkin and Malyutin were inspired to create the dolls after they saw a Japanese doll, which was either a fukuruma nesting doll or a hollow daruma doll. In 1900, the wife of Russian industrialist Savva Mamontov displayed the dolls at an international exhibition in Paris, and they were awarded a bronze medal. Shortly after that, many craftsmen in various parts of Russian started making matryoshka dolls.

The earliest matryoshka dolls were mostly depictions of female peasants in Russia, but today, there are many different themes for you to choose from. Some of the more common themes for matroyshka dolls include animals, flowers, religious, Christmas, Easter, caricatures, portraits, athletes, politicians, musicians, movie stars, astronauts, and robots. Here is a list of lovely matryoshka dolls that are available on the Internet:

Traditional Matryoshka Dolls
Although they have little to do with modern life, traditional matryoshka dolls are still highly sought after today. They mostly depict women or girls in traditional Russian or religious costumes, and they are an excellent representation of Russian culture.

Animal Russian Dolls
If you are an animal lover, you will surely want to get a set of animal Russian dolls. You can find Russian dolls with images of all kinds of adorable animals, including dogs, cats, horses, bears, pigs, sheep, and others.

Russian Dolls at Work are the perfect decorative items for your workplace. They can add a touch of whimsy to your workplace and liven up your working days. There are Russian dolls representing many kinds of occupation, ranging from policeman to doctor.

Some famous characters that appear on movies and television shows are truly adorable, and it is a good idea to purchase Russian Dolls that represent them.

Whimsical Russian Dolls
If you have no particular characters, personalities, or themes in mind, you can buy a whimsical Russian dolls. These dolls can depict a wide range of interesting things, ranging from monsters to robots.